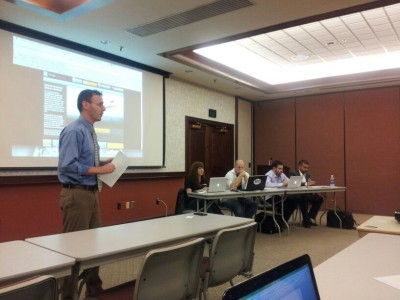 SEO meetups happen all across the country, and for good reason.  Just as in every industry, internet marketing has conferences, roundtables, and meetups where professionals and consumers interested in the industry can meet, learn, discuss, and network.  Every couple of months, the Lancaster Online Marketing Group holds a meetup.  The most recent, named the 2012 Lancaster SEO Panel and Live Audit, occurred on October 24th, 2012.  Oliver Feakins and Mike Canarelli, CEO and COO, respectively, of Web Talent Marketing were kind enough to provide a venue and some of their own professionals for the panel.  There were 4 seasoned pros on the panel this time around:

Matt Self, the Vice President of Web Talent, acted as moderator.

Topics covered ranged from the buzz question, “is SEO dead?”, to the effects of social, to Panda and Penguin, and beyond.  It was a truly helpful, beneficial panel for beginners in SEO to advanced professionals.

There was recently an article on Forbes with the title “SEO is Dead.”  It caused a flurry of activity and what could be considered a maelstrom of activity in the internet marketing world and on social media platforms.  Although much of the hubbub has died down, it’s still a question a lot of people haven’t answered yet.  Lorianna was the first on the panel to tackle the question and summed up the sentiments of the rest of the panel.  She explained that SEO has been defined and redefined over and over again.  One version “dies” and another one comes up.  It’s not so much that SEO is dead – it’s just evolving again. 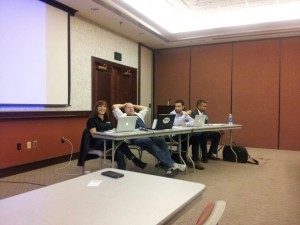 How is social media affecting SEO and how do we know?

Bentz explained that it was easily manipulated and easy to see when the Google+ button was right next to the search results.  Once that disappeared from the SERPs, the focus shifted even more towards content.  If you have a piece that can go viral, social media platforms make it possible and shift the focus to making good content, something engaging, something that will convert, something that people will want to share and pass on.  Lorianna mentioned these are social metric validation factors.  Google, in particular, no longer ranks specific tweets in the SERPs, instead it ranks user profiles and content that has a lot of tweets.  The more social attention a piece of content gets the more it is validated as good content.

Ray added that it’s important to get involved through social media and post about what’s going on in your business.  Ganesh mentioned, in regard specifically to Google+, that since Google has the “keys to the henhouse,” of course they’re going to use that information to show more relevant search results.  Citing a recent article, if you’re using it for free, you’re the product.  Lorianna and Ganesh both mentioned that social is a great tool for getting bodies to your site and improving rankings, but Ganesh warned that Google will index personal profiles, not tweets, so if you’re using Twitter for rankings, you should probably change your strategy as you cannot rely on it alone.

Two of Google’s largest algorithm updates have been named after cute animals starting with the letter “p”.  Possibly to soften the blow?  We’ll probably never know.  A lot of people are still confused on what exactly these two changes did and how to handle things moving forward.  Ray pointed out that Panda was released to target the content farmers.  Bentz added that Penguin was related to stuff happening off-site, specifically targeting backlink profiles and those links coming into your site that were obviously placed there just to improve rankings.  Lorianna continued, saying that the most recent Penguin updates targeted older sites who had gamed the system in the past.  Those who changed content benefitted from this update, but those who didn’t were penalized as they showed a declining backlink profile and just a few indexed pages without new, fresh content.

As far as what to do about it, Ganesh warned that though we should care, we shouldn’t change everything to change things tomorrow – it’s like chasing a moving target.  At the end of the day, Google is making search more relevant to make more money.  It’s a for-profit industry, so the best thing to do is print out those 23 questions to ask yourself for content and keep it in front of you.  Lorianna adds that it’s essential to stay on top of what is changing and why it is changing and employ those tactics.  Looking at updated webmaster forums, webmastering101, and those 23 questions are a good frame when starting out with SEO.

Other tips and tidbits

Lorianna stated it simply - think about what you’re doing.  The goal is to make a natural-looking backlink profile.  When you do keyword research, keep relevant long-tails.  Use brand names where it makes sense to use a brand names, add a keyword if you really want, but don’t be afraid to use the brand if it makes sense.  Utilize naked URLs and No Follow links.  Bentz continued, adding to comment on blogs, without links, but to remember one thing with backlinks and blogs for comments - you better have something useful to share.  If you have something good and helpful, you can link to that in comments, not to your product pages.

Ganesh and Ray mentioned, and the panel agreed; press releases are still a viable strategy; they’re a part of any successful marketing strategy and should be a part of any successful digital marketing strategy.  As long as press releases are not over-optimized and victims of keyword stuffing, they can be a great tool for engaging with your audience, raising brand awareness, and even getting some of those authoritative links coming back to your site.

Ray offered that Majestic SEO and Open Site Explorer can give a good preview of what’s going on behind the scenes of a website, but he acknowledged you would have to pay for the full scope from both services.  Bentz added that SEO Book has something like that and for registering on the site, you can access a whole suite of free tools for checking rankings and other stuff, especially if you use Firefox.

Bentz mentioned that based on Analytics, Bing is not much of a contender right now, but if you want to decrease spend in AdWords, PPC in Bing can be a little bit of a lower cost with a little higher conversion rate.  Also, exact match domains tend to rank better in Yahoo and Bing than in Google.  Ganesh agreed that Bing may not be a huge contender today, but he’s not taking them off his radar just yet.  He asked us to take the wayback machine to the 90s when Google wasn’t a contender – look at it now.  Bentz added that the optimization we usually do for Google, normally works well for Bing too.

After the live site audit, Oliver jumped in to say that if you’re learning SEO, get a foundation before you get distracted by all the toolbars.  Page Rank is a good example.  It’s a number and, if you don’t understand the methodology behind the number, you can’t properly analyze it.  Read first.

In closing, stay educated, stay on top of what’s changing and why, employ the right tactics, and above all, create good, helpful content.