"15 of the Most Sexist Marketing Campaigns from the Past"

15 of the Most Sexist Marketing Campaigns from the Past

The Most Sexist Marketing Campaigns

The advertising world is a truly fascinating instance of subtle or even overt psychological manipulation. Its basic formula — (1) Create a feeling of need or inadequacy (2) Offer a product to fill the void (3) ??? (4) Profit!!! –- is one that is intrinsically demeaning. It is therefore unsurprising that accusations of sexism are often hurled with great fervor at many marketing campaigns. Some of these are mild and easily brushed off – yes, gender specific products are pitched at the relevant sex, but they are necessarily discriminatory. Some are harder to defend – whether overtly sexualizing women in advertisements amounts to sexism is debatable. Others are impossible to defend, either because they blatantly proclaim one gender as inferior or because they reinforce established sexist gender stereotypes. Here are 15 really, really sexist ads. 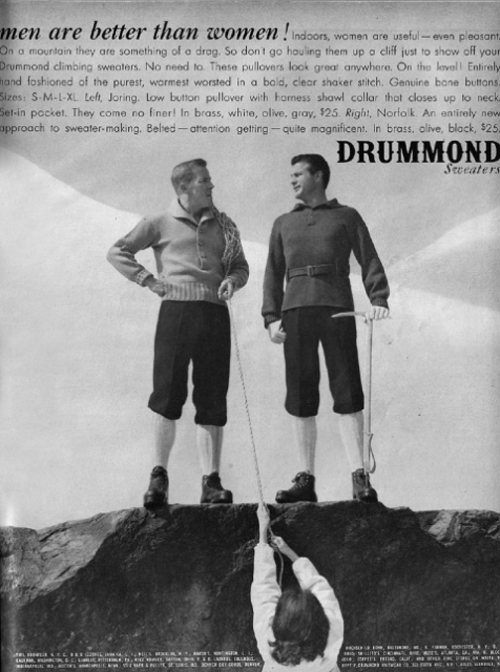 Not even Robert Shapiro could defend this marketing campaign from accusations of sexism. The blatant sexism is so over-the-top that it’s laughable, even more so given that it is completely unrelated to the product being advertised. The preposterous proposition –a preposterousition, if you will – that “indoors, women are useful – even pleasant, [but] On a mountain they are something of a drag”, somehow fails to instill the burning and immediate desire for a “belted – attention grabbing – quite magnificent” sweater.

Mr. Leggs – It’s nice to have a woman around the house 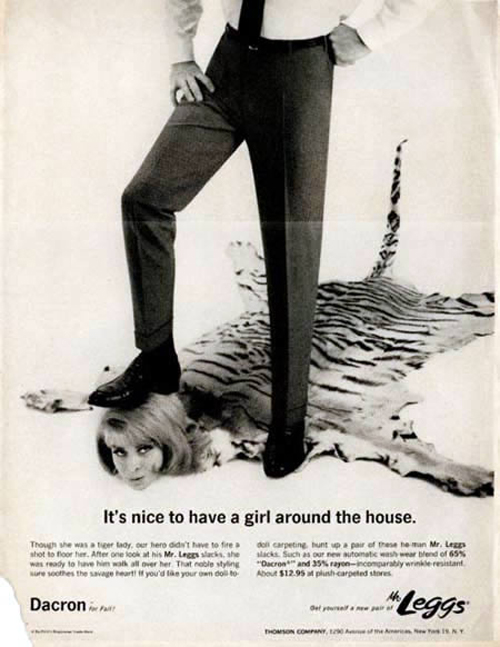 Mr. Leggs seems to agree that there is some utility and pleasantness in a woman’s presence in the modern urban indoor environment. However, its implementation of this notion in this particular advertisement is confusing at best and downright disturbing at worst. Why is there a bizarre tiger-rug-woman splayed on the floor? The tagline informs us it’s because she is a “tiger lady”. Why is there a man firmly standing on her with his foot atop her head in some sort of victory pose? Oh, because once she saw his Mr. Leggs pants she let him “walk all over her”. Groan and close tab. This advertisement’s failed humor and implicit disrespect has resulted in it being a staple in most discussions of sexist marketing.

The Hornes company evidently liked Mr. Leggs’ head stomping idea, paying unintentional homage when it launched this marketing campaign. Granted, the woman is wearing a disgusting beret that should be trodden into oblivion, but perhaps not whilst she is still wearing it. This ad tries to play on a common adage, that of “wearing the pants”, but misses miserably. How “wearing the pants” translates into casually resting one’s leg on decapitated women is a leap almost as discomforting as the ultra tight pants the man is allegedly wearing.

Pitney-Bowes Postage Meter – Is it always illegal TO KILL A WOMAN? 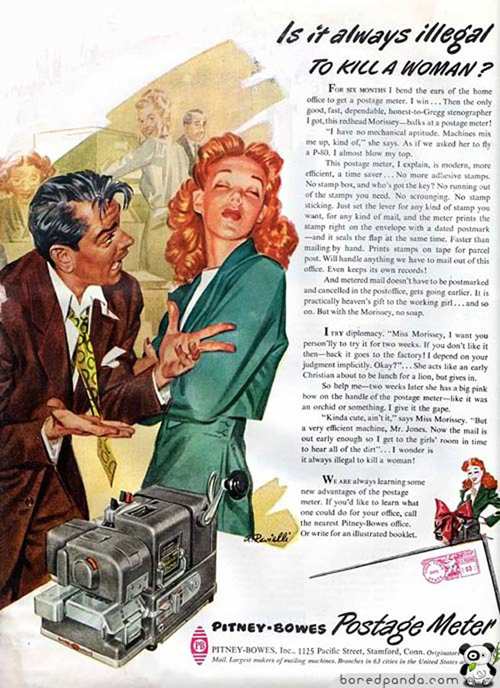 For six months I bend the ears of the home office to get a postage meter. I win …Then the only good, fast, dependable, honest-to-Gregg stenographer I got, this redhead Morissey - balks at a postage meter!

“I have no mechanical aptitude. Machines mix me up, kind of,” she says. As if we asked her to fly a P-80.  I almost blow my top.

This postage meter, I explain, is modern, more efficient, a time saver… No more adhesive stamps. No stamp box, and who’s got the key? No running out of stamps you need. No scrounging. No stamp sticking. Just set the lever for any kind of stamp you want, for any kind of mail, and the meter prints the stamp right on the envelope with a dated postmark – and it seals the flap at the same time. Faster than mailing by hand. Prints stamps on tape for parcel post. Even keeps its own records!

And metered mail doesn’t have to be postmarked and canceled in the post office, gets going earlier. It is practically heaven’s gift to the working girl…and so on. But with the Morissey, no soap.

I try diplomacy, “Miss Morissey, I want you personally to try it for two weeks. If you don’t like it then – back it goes to the factory! I depend on your judgment implicitly. Okay?”… She acts like an early Christian about to be lunch for a lion, but gives in.

So help me – two weeks later she has a big pink bow on the handle of the postage meter – like it was an orchid or something. I give it the gape.
“Kinda cute, ain’t it,” says Miss Morissey. “But a very efficient machine, Mr. Jones. Now the mail is out early enough so I get to the girls’ room in time to hear all the dirt”…I wonder, is it always illegal to kill a woman?

This advertisement throws into stark relief one of the great gaping inconsistencies of the ‘50s era: the fascist illustrator has blatantly failed to include the big pink orchid-rendering bow on the postage meter’s handle. 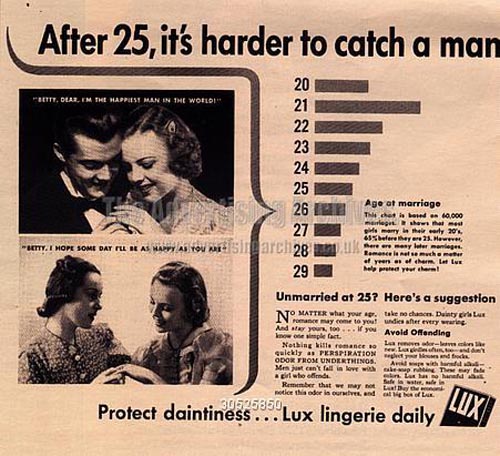 Miss Morissey would have no doubt been familiar with the Lux company, who ran a 1920’s advertising campaign with the bold headline, “A warning to women who work in offices – nervous strain increases perspiration, don’t run the risk of ‘undue odor'”. Their product? Lingerie deodorant (designed to prevent awkward waftage). Perhaps Lux’s most bizarre and sexist campaign was one which suggested that one unwed by the ripe old age of 25 was probably so because she was rank (smelling). The copy on the ad offers some real pearls of wisdom, probably from the mouth of the same donkey that conceived of such a ridiculous product:

“Nothing kills romance so quickly as PERSPIRATION ODOR FROM UNDERTHINGS. Men just can’t fall in love with a girl who offends.” Conceded, unbearable halitosis can be a barrier to romance, but really, reeking lingerie? That’s just a perfect excuse to get nekkid as quickly as possible! 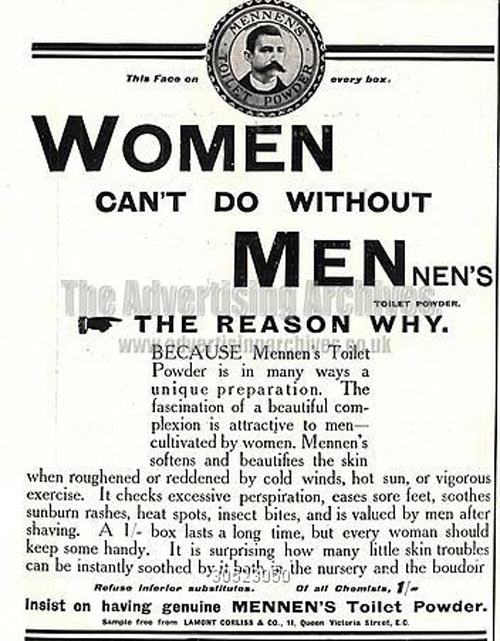 Excessive perspiration seems to be one the chief maladies of ladies of the early 20th Century, for there is a huge number of products and advertisements devoted to it. One of these, Mennen’s toilet powder, ran this campaign. Apart from the obvious sexism in the headline, the closing line is also of note: “It is surprising how many little skin troubles can be instantly soothed by it in the nursery and the bedroom” – relegating women to the stereotypical roles of childbearers and sexual objects.

Lysol – Why does she spend her evenings alone?

This is another ad campaign that uses feminine hygiene to sell its product. And again, it sows the seeds of self doubt by declaring, “she keeps her home immaculate, looks as pretty as she can and really loves her husband, BUT she neglects that one essential…personal feminine hygiene”. Again, the stereotype of women as housebound husband-pleasers is reinforced – not only is she responsible for the maintenance of the house, but for maintaining his sexual libidinousness too. But perhaps the most disturbing part of this ad is its suggested use for Lysol, nowadays used as a hospital disinfectant, as a douching agent. 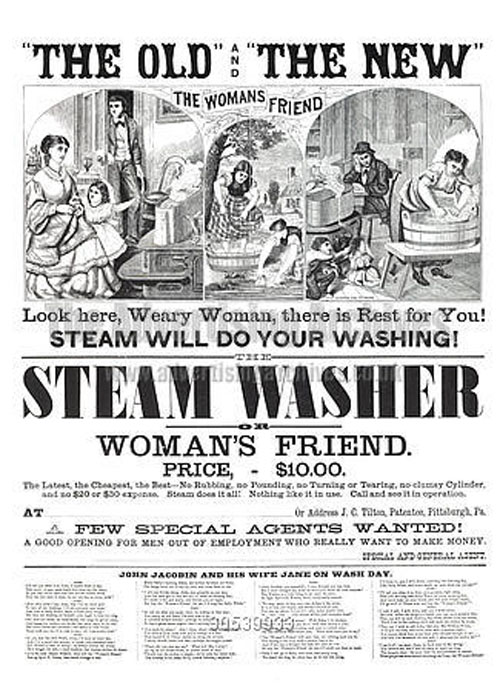 This advertising campaign from the 1890’s is ever more vintage than the purple/teal sweater clashtastrophes that your average hipster fawns over. Heralding the advent of the newest innovation in home laundering, this advertisement gives a useful illustration of the life of a woman in those times – note especially the illustration in the top right, with its depiction of a little perving Geronimo. 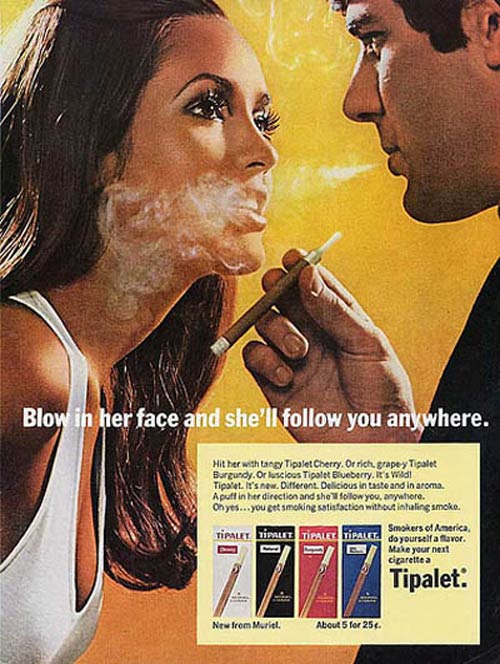 This marketing campaign is so wantonly laden with innuendo that it was probably a spunky, tongue-in-cheek spoof of the advertising world. But satire, if misunderstood, becomes indiscernible from the subject it derides. Somewhat ironically, this particular ad is often accused of sexism. And yes, irrespective of the intention, this ad does have misogynistic overtones - in both the violence implicit in its literal construction (interference with the woman’s personal space by blowing smoke in her face) and the sexual domination inherent in the allusion (producing a chin omelet) so it is easy to see why it is thus accused. 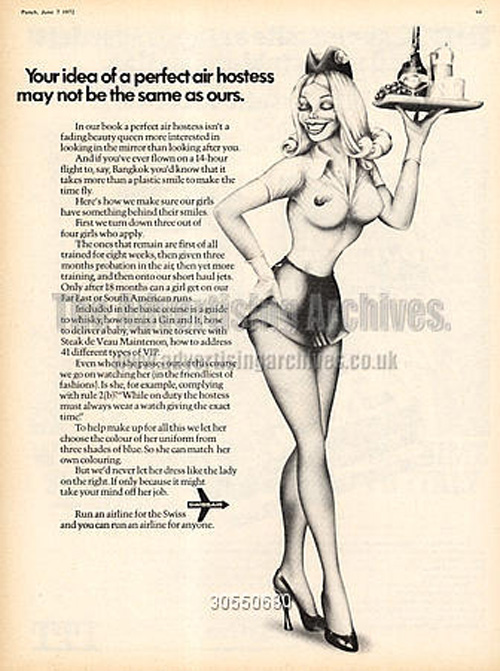 This is another advertisement that contains some small irony. In trying to distance themselves from the sexist stereotype of the air hostess, Swiss Air enumerate all the facets of this stereotype and publish what they were trying to avoid. Moreover, their description of their non-sexist training regime, in hindsight, seems very sexist indeed. Granted, it is a service industry, so training air hostesses “how to address 41 types of VIP” is probably pertinent to the job – and is only demeaning insofar as the servile nature of the industry is demeaning. Swiss Air generously tries to alleviate this: “to help make up for all of this we let her choose the colour of her uniform from three shades of blue. So she can match her own colouring.” However, the chief irony is in their parting statement: “But we’d never let her dress like the [scantily clad] lady on the right… If only because it might take YOUR mind off her job.” That’s right – Swiss Air won’t dress their hostesses like strippers, not because it is demeaning to them, but so that your letching won’t prevent you from enjoying their servitude.

Volkswagen – Sooner or later, your wife will drive home one of the best reasons for owning a Volkswagen 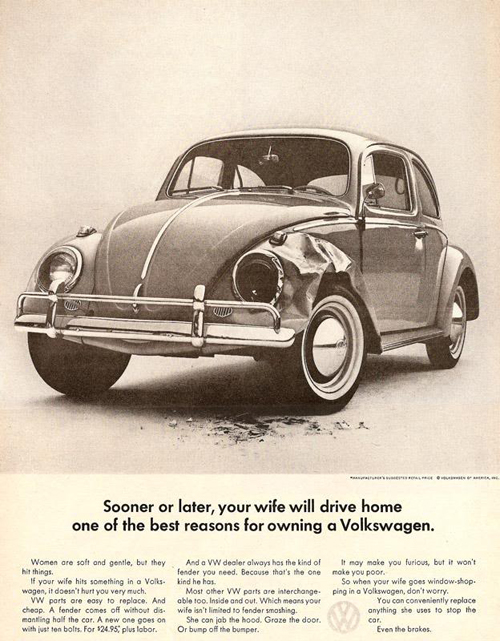 “Women are soft and gentle, but they hit things. If your wife hits something in a Volkswagen, it doesn’t hurt you very much.”, proclaims this marketing campaign, reinforcing the stereotype that women make for bad drivers. There are several other swipes in the ad, including: “…Which means your wife isn’t limited to fender smashing. She can jab the hood. Graze the door. Or bump off the bumper.” Volkswagen? More like Blokeswagen. And rather than providing a solution for the problem (poor driving), the ad’s remedy is, sneakily, to buy more Volkswagen parts.

Chase and Sandborn Coffee – If your husband ever finds out 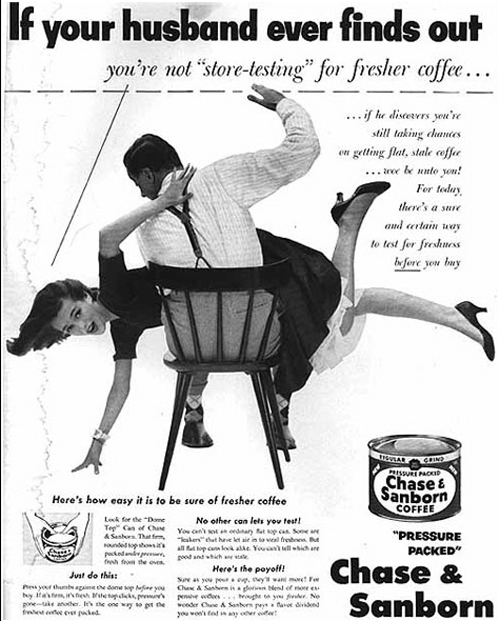 Soft and gentle women may hit things in Volkswagens, but why not hit them instead? This ad seems perfectly at ease encouraging corporal punishment for wives daring to take shortcuts with their husbands’ coffee supply. Perhaps this was normal at the time, but we still feel that this ad caused significant controversy at the time it was published – we can see her ankles!

Thus far this article has only considered sexism relating to women, mainly because this is predominant trend in advertising. However, let us consider some sexism directed at men. This campaign of G. Washington’s Instant Coffee provides a solution for the poor man whose wife still won’t store-test his coffee (although this is now because she has selfishly died after an enthusiastic and fatal beating). But it’s okay, dear widower: there is now a coffee that is easy enough for you, a simple man, to be able to make in just 5 seconds!

Roger’s Lingerie – Every man wants his woman on a pedestal 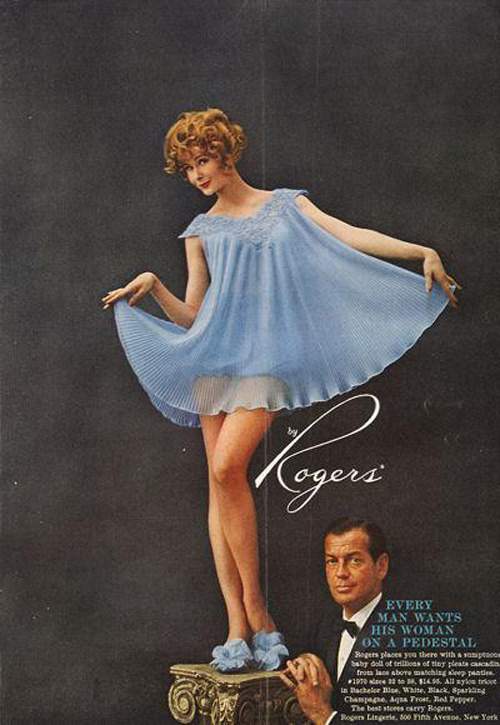 Just as the conventional wisdom relating to the roles that women play is offensive, so too is the conventional wisdom underlying this promotion run by Roger’s Lingerie, the eponymous fashion label of silver-screen sexpot Ginger Rogers. In this ad, the rather dapper man is unable to appreciate his love for her, and can only play the role of a bank in a warped romantic ideal. He simpers at us gloweringly in his stiff formalwear, uncomfortable with his body and his forced position dictated by society whilst his love swans above happily, carefree in her light diaphanous silk, exulting in her sexuality. Or perhaps this is a representation of a stripshow – where a woman is just an object, naked under the critical and lecherous eye of the fully dressed male - and is actually more demeaning to her. This raises an important point with which to conclude: sexism can always be found if one wants to find it. Sexism is just as dehumanizing to the gender being demeaned as it is to the gender being glorified. As human beings, we should not let sexist intolerance or any intolerance rile and divide us: we dignify such ignorance if we allow it to offend us.