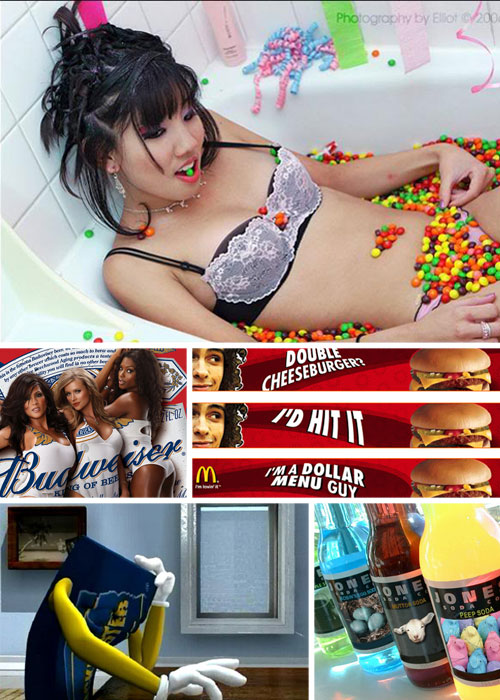 In this day and age, someone is always trying to sell you something.  Look around yourself right now; it’s incredibly unlikely there is not an advertisement within arm’s reach. In such a crowded market, it’s no wonder advertisers have tended toward bolder messages and devices in an attempt to break through the average American’s consumption haze.  Then there are those who see “bold” and think “license to be offensive, patronizing, and hopelessly insane”.

A lot of advertisers have become disillusioned with the whole “doing work” thing, and have instead been outsourcing their advertising to fame-hungry consumers.  Why pay for video editing, actors, and stunt drivers when you can drum up word of mouth and street cred by having someone else make videos for you? This usually isn’t a bad idea and it can generate some ads that are uncharacteristically not terrible.

While this strategy works well with products that are generally liked, it starts to become treacherous when you ask the tech-savvy, progressive, and “No, F*ck You”  comment-leaving generation to promote the generally-hated SUV.  Unsurprisingly, environmentalists swarmed the contest with entries that romantically described the SUV’s lack of efficiency and environmental harm.  To be fair, it’s hard to tell if these are attacks, or simply stem from the impossibility of finding a good reason for owning an SUV

Fresh off the raging success of their IBM PC, execs were looking for another market to expand their personal computer business into.  Apparently, someone decided to go for “educational computers”, was met with several bored sighs, but then went forward with the idea anyway because they didn’t have anything better to waste money on.  Thus consumers were greeted with the IBM PCjr.
On the surface, the PCjr doesn’t sound like an especially bad idea.  At the time, schools were just beginning a trend of spending millions of dollars annually on educational computers, and IBM wanted in on the leading edge.  In addition, the PCjr featured a wireless keyboard almost a decade before they became the norm.

So how did IBM decide to pitch this revolutionary, forward-thinking dream machine?  By inexplicably putting it in the hands of a 1930s silent film star.  Based on Charlie Chaplin’s flailing about with the wireless keyboard, consumers unsurprisingly deduced that the product was ancient and difficult to use. 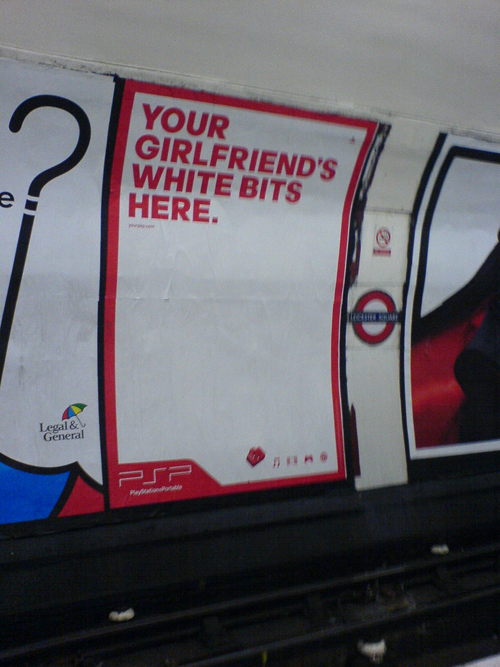 After having once dominated the gaming industry, Sony struggles mightily in the current generation.  Criticized for an inability to listen to its customers, Sony eventually ditched the “You’ll pay $700 and your firstborn for a console and consider yourself lucky” line and tried to reconnect with their customers through a series of quirky and viral ad campaigns.

First they paid artists to vandalize several buildings with what they hoped would be interpreted as genuine, organic expressions of love for the PSP.  After bullshit was called multiple times, they decided maybe they would have more luck with racism.  Failing that, they went all out with incoherent ads in subways that encouraged commuters to jump on the tracks and a fake “viral” site that fooled exactly two grandmas in Wisconsin.

One can only imagine the conversation that went in to the creation of Calvin Klein’s creepy near-porn advertisements.

“We need something edgy as balls.  What’s edgier than anything in the world?”
“Pedophilia?”
“GREAT IDEA!”

There’s a long, storied history of marketers trying to make their product appear more “hip”  and “streetwise” by associating it with popular hip-hop artists.  Usually this consists of an awkward rap and a half-hearted endorsement — in other words, the sort of ad audiences pay absolutely no attention to.  Seeking to avoid this, Reebok recruited 50 cent and made the entire ad about how he was shot nine times. And also has on Reeboks, maybe?

The ad was pulled after being heavily criticized for glorifying violence in order to sell shoes.  Though thinking that anyone watched the ad and came away with the idea that they should buy shoes instead of that 50 cent was shot nine times is something of a charitable interpretation.

While criticizing the New Coke marketing campaign is like shooting sea bass in a thimble, this nonsensical campaign is simply too good to pass up.  It seems like a tautology, but every marketer will tell you that the first rule of advertising is to “know your customer”.  With such a simple maxim, it’s amazing how so few companies choose to follow it.

Coke was looking to break in to Pepsi’s greater market share by updating the comparatively bitter Coke’s flavor.  Then, ignoring their own market research, Coke tried to shove the new brand down consumer’s throats through every means possible.

A strong, vocal minority lambasted the new product and eventually irrevocably tarnished its image.  It didn’t help that Coke decided to pitch their products with the most ridiculous videos of Bill Cosby feverishly rambling about how great New Coke is.

You can’t mention New Coke without talking about Crystal Pepsi, a similarly well-conceived but poorly executed product.  Following a popular trend of the 90s, Pepsi decided to revamp their product as a “clear” alternative to the run-of-the-mill colas.  Apparently never having heard of Sprite or 7-Up, Pepsi created a sexy marketing campaign that made absolutely no flipping sense and released the product nationwide.

But in a twist that will shock and amaze the preschoolers in the room, Crystal Pepsi tasted terrible.  Instead of a crisp refreshing drink, consumers were left drinking a thick, syrup mess that taste like sugar water mixed with pond scum.  Pepsi got so caught up in a slick marketing campaign that pitched their product to the latest fads that they forgot to make their soda taste good.  And that’s not snarky commentary either; when asked why the product failed in 2006, Yum Brands Chairman David Novak’s response was essentially “I forgot”.  As he put it, “It would have been nice if I’d made sure the product tasted good.” 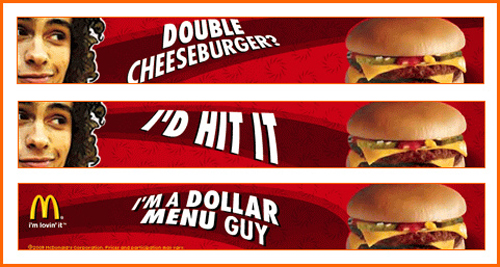 Sometimes a company’s ad campaigns make you think that they just start with an edgy concept, then play word association until they pass out or overdose.  In the case of their unfortunate “I’d hit it” ads it seems like they started with the edgy concept “sex,” then corralled a bunch of frat boy interns into the room to fill out the rest.

You can imagine the backlash when these banner ads hit otherwise wholesome sites that usually featured some harmless McDonald’s ad like “i’m lovin’  it” suddenly found themselves headlined with talk of banging Big Macs.  There’s a fine line between titillating innuendo and tastelessness that serves no purpose other than to be crass.  McDonalds toed this line, then they… hit it, hard. 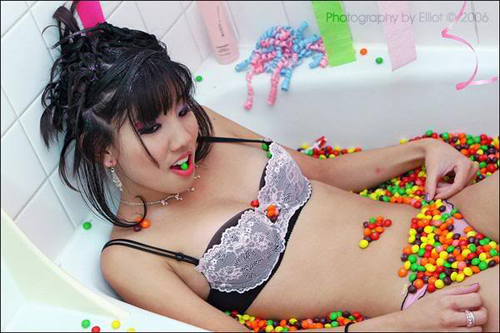 Advertising as an industry is a slave to fashion.  Currently, it seems like everyone and their mother who is selling cat figurines has decided that they need to “social market network synergize” their product.  A generally good idea that allows companies to get closer to their customer base, it often fails to take into account the fact that the Internet is full of petulant manchildren.

When Skittles briefly turned their main page into a search redirect for #skittles on Twitter, internet pranksters all got in on the joke and briefly caused people to think that there was a serious debate about whether Skittles cause cancer.  Though this marketing ploy was eventually praised as a bold move toward transparency and honesty with customers, it goes to show that while companies are often condescending and deceptive toward consumers, in the modern era their customers can be just as terrible back.

While there are a million and one examples of companies updating their image with hip-hop in an effort to be more “modern” and “urban”, some of these stand out as being of particularly criminal tastelessness.  This was the case in the early 90s when someone at Post got wind of those kids and their rap music and decided to update characters from the stone age with M.C. Hammer’s image.  You say you’re jaded — you say no advertisement can penetrate your air of cynicism?  Well I dare you to watch this video of Barney Rubble rapping and tell me you didn’t cringe and die a little inside. 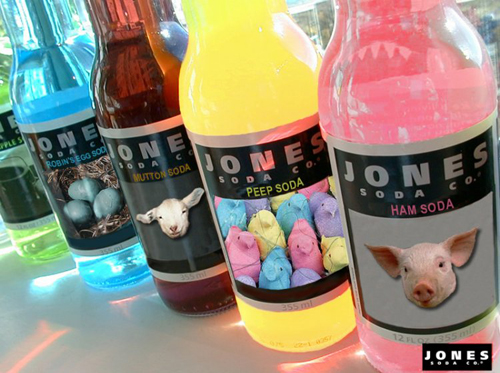 Some things are edgy because they are cool; some things are edgy because they repulse and revolt.  And much like the McDonald’s “i’d hit it” campaign, Jones made the mistake of thinking that things that disgust people would be a winning combination with things we put in our mouths.  This was the case with their new, “cuh-razy” flavors that included such lip-smacking offerings as “Perspiration” and “Dirt”.

As a company with a long, traditional history emerging from down-home Indiana, Orville Redenbacher suffers from something of a stodgy, outdated image.  Apparently, a product with a picture of a geriatric on the front doesn’t resonate with today’s with-it generation.  In order to address this, a sane company would ask why it matters if popcorn is considered trendy. A mediocre company would attach their product to an aging hip-hop artist.

But not Orville Redenbacher.  They went the hopelessly ill-conceived route of resurrecting their founder and having him talk about MP3 players and other things you kids are crazy about.  What deluded lunatic thought they could update a brand by taking the exact symbol of the brand’s outdated nature and place him firmly in the uncanny valley? 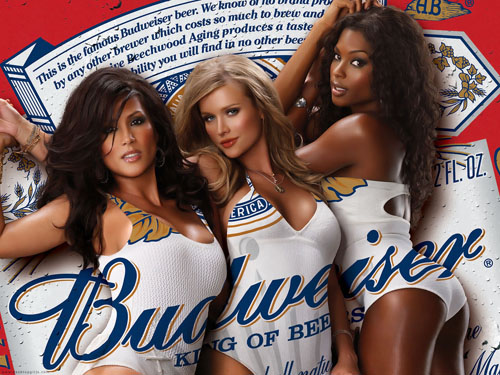 In 2005, Miller unveiled a clever, if unremarkable, ad campaign that featured referees chastising fans for drinking Bud Light.  The ad featured all the stand-bys of cheap beer advertising: humor, sports, and unverifiable claims about some quality of the beer — in this case, that Miller Lite had more taste.

Budweiser took issue with being called out as the tasteless light beer (as if that weren’t a redundant statement) and fired back with ads that depicted the referees stealing the Bud Light in order to secretly drink it.  Budweiser’s campaign failed miserably, mainly because by responding to the Miller ads, they gave credence to their rival’s claim that any cheap beer has anything resembling “flavor”. 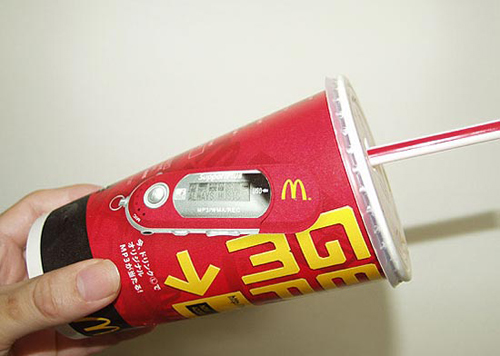 The McDonald’s marketing department clearly has a tenuous grip on things that matter in reality.  Previously, it was their inability to understand that a blatantly sexual campaign wouldn’t go over well when it told you to bang your sandwich.  In this latest iteration, McDonald’s can’t seem to get the whole free giveaway thing right.

First they began handing out free Hummer toys to children, as if that weren’t the most reviled car brand in America.  McDonald’s freely admitted that they were trying to deliberately manipulate parents through their children.  Then, just to prove the weren’t anywhere close to competent, in 2006 they handed out MP3 players branded with the McDonald’s image.  The players contained 10 free songs that users could obtain by plugging the devices to their computers — at which point the Trojan virus also accidentally contained in the devices was released. 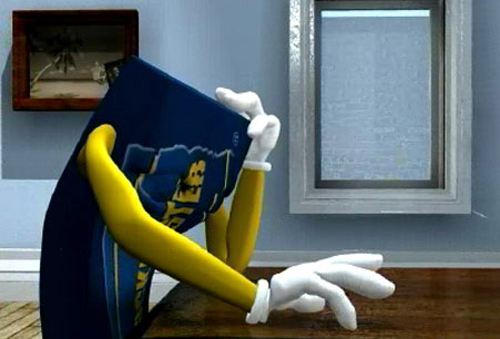 Back in the day (2003), Blockbuster unveiled what seemed like a revolutionary and economically infeasible strategy: no more late fees on their rentals.  The marketing campaign was tremendous, every store featured giant banners, and the airwaves were peppered with ads for the new Blockbuster.  But remember the part about it being economically infeasible?  It still was, but they just never told customers the whole truth.

At the time, Blockbuster was the rental behemoth, the port of call if you wanted a movie.  The “no late fees” campaign was supposed to cement their place at the top of the market; instead, it most likely killed them.  In reality, customers had a certain period of time after the return date.  If the item wasn’t returned before then, they were charged the whole value of the movie.  If they thereafter returned it, their money was refunded in store credit only.  This campaign’s duplicity ended with several lawsuits and alienating just about every single one of Blockbuster’s customers, leaving them incapable of competing with Netflix.  Blockbuster re-instated late fees recently this year, which coincidentally will probably be the last year most people set foot inside a Blockbuster.