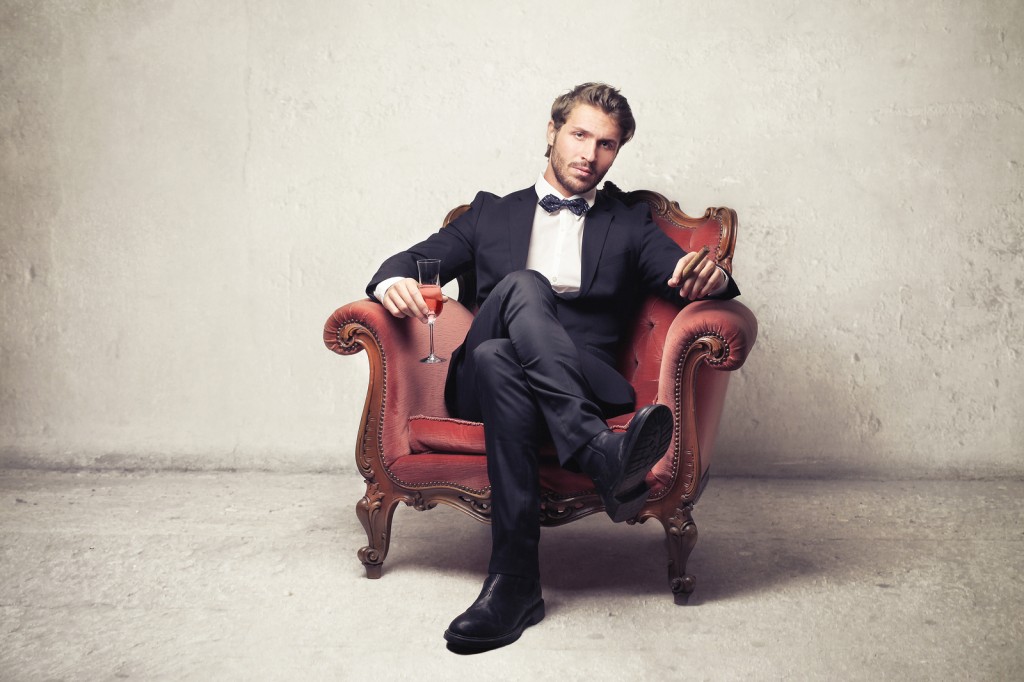 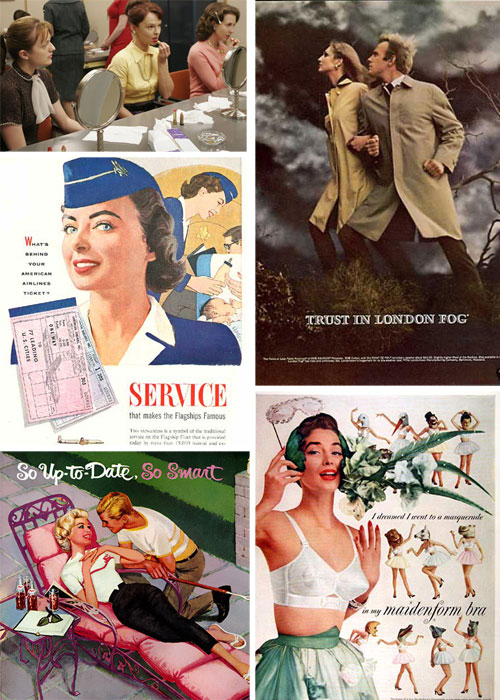 AMC’s Mad Men has been rocking the airwaves for more than three years.  The show, which follows the exploits of Madison Avenue’s Sterling Cooper advertising agency in the first part of 1960’s, has just entered its fourth season and is still just as fresh and stirring as it was in its first.  Critics have applauded the show for making excellent use of marketing tactics, some real and some fictional.  Here we have collected fifteen of the most genius tactics aired to date. 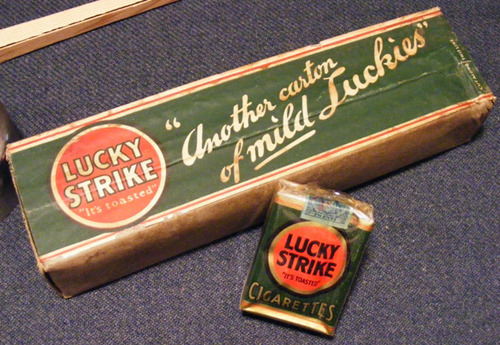 What better way is there to begin a powerhouse series like AMC’s Mad Men than with a powerhouse marketing campaign?  This is America’s introduction to Don Draper, the handsome, mysterious, adultery-prone sweetheart of Eisenhower-era Madison Avenue: a stranger sits in a crowded, smoky bar, scribbling furiously on a napkin. He stops a waiter and accosts him with questions about his smoking habits — “An Old Gold man, eh?” “I could never get you to try another brand, say, my Luckys?” “My wife hates it, says it causes cancer,” responds the waiter. In a moment of unexpected tenderness, a rich, white executive and a poor, black waiter share a laugh at the expense of women.  Welcome to 1960!  Cigarettes, it turns out, cause cancer.  How do you market a carcinogen?

Don Draper is on the case: “Lucky Strike: It’s Toasted!”  It’s a diversionary tactic.  “Everybody else’s tobacco is poisonous,” he explains to his clients, “Lucky Strikes is toasted.”  It sells. 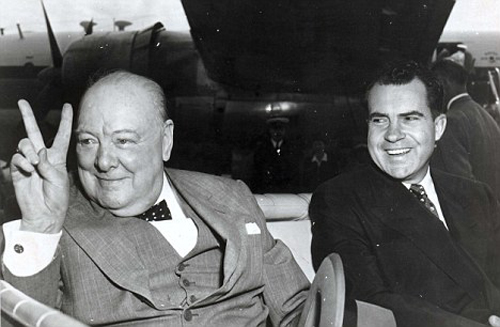 Having the advantage of living in the year 2010, we know that doing pro-bono work for the 1960 Richard Nixon campaign is a fruitless endeavor.  Draper and gang aren’t so lucky.  So what kind of smear campaign do they cook up to smash JFK in the polls?  The everyman routine.

Don sums it up: “Kennedy? Nouveau riche, a recent immigrant who bought his way into Harvard. Nixon is from nothing. Abe Lincoln of California, a self-made man. Kennedy, I see a silver spoon. Nixon, I see myself.”  How does the campaign go over?  Pick up a history book. 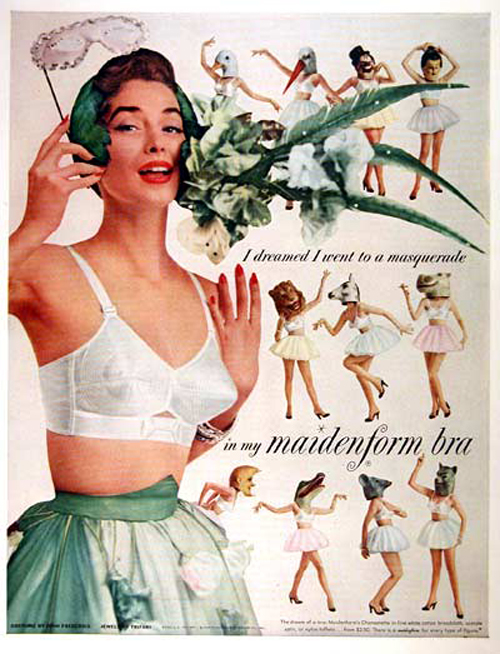 There is no human flaw easier to manipulate than our insecurities.  Body issues are tough to deal with, sure, but you can you use them to make money?  Say you’re selling Playtex bras—how do you shame your customers into buying your product?  The marketing wizards at Sterling Cooper know.

“Jacquelyn Kennedy.  Marilyn Monroe.  Women have feelings about these people because men do… It’s about how they want to be seen by us — their husbands, their boyfriends, their friends’ husbands.”  The first lady represents the brains, the grace, and the power; for the actress it’s the sex, the affection, and the skepticism.  Playtex has it all.  The clients eventually turn the campaign down, disappointing Sterling Cooper until Marilyn Monroe commits “probable suicide” in 1962. 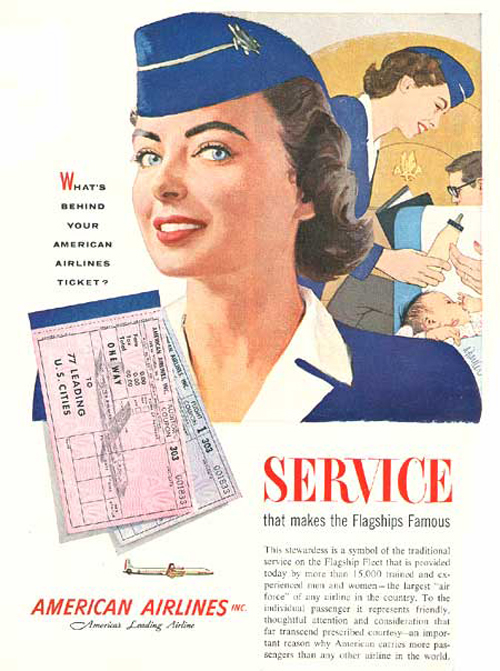 A lesson in crisis management: In 1962, American Airlines Flight 1 crashed into some marshland in New York City’s Jamaica Bay, killing 95 people.  And who, in the world of Mad Men, handled American Airlines advertising campaigns in 1962?  Sterling Cooper, of course.  Don opts to ignore the incident altogether, focusing on the future instead. “That crash happened to somebody else,” he says.  “Let’s pretend we know what 1963 looks like.” 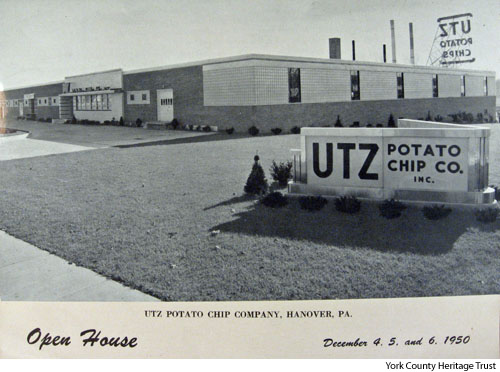 Here’s a Don Draper miracle:  The Sterling Cooper team, in their mighty crossover to television, hires a semi-notable smartass comedian named Jimmy Barrett to advertise  UTZ potato chips.  Barrett goes a step too far when he insults the weight of the Company President’s wife and nearly gets fired.  He’s on thin ice.  But Barrett’s wife, with whom Don is committing adultery, wants to pitch a hidden camera show starring her ferocious, asinine husband to a national network, and national television shows need national sponsors — Barrett would have to drop the Northeast-exclusive UTZ, and that is not what his wife wants.  Don, who is given only seconds to think, comes up with this:  “[UTZ] could be told that their sponsor would have more punch, wherever they air, if Jimmy’s on a hit television show.”  And a celebrity endorsement is born!  Oh yeah, and the name of the proposed show? “Grin and Barrett.” Does it air?  Of course not! 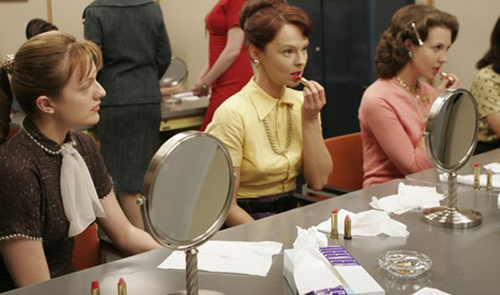 Up-and-coming copywriter Peggy Olson (and glass ceiling-shatterer, we hope!) and experienced-but-often-uncontrollably-drunk ad man Freddy Rumsen crafted this next ad for  Belle Jolie Lipstick.  A woman stands beside a man; the man has a fresh lipstick-kiss mark on his cheek.  Both are glowing with tenderness and excitement.  “Mark Your Man,” the copy reads.  But the client is dissatisfied.  He wanted an ad that would promote their more than 100 colors of lipstick.  Don has the answer: “Every woman wants choices, but in the end, none wants to be one in a box of a hundred. You are giving every girl who wears your lipstick the gift of total ownership.” The clients buy the pitch.

By the 1960s the telegram had practically gone the way of the dinosaurs.  Why schlep over to the nearest Western Union to contact a loved one or business partner when all you need to do is pick up the phone?  Western Union came to Sterling Cooper looking for a new angle.  It is fortuitous for them that Mr. Draper has received a few upsetting telegrams of his own (no plot spoilers!).  A phone call is just a phone call, but a Telegram is important.  Don’s tagline: “Ignore a Telegram? You can’t.”  As Natasha Vargas-Cooper puts it in her new book, Mad Men Unbuttoned, “tell us to ignore something, and we won’t be able to.”  Again, the pitch sells. 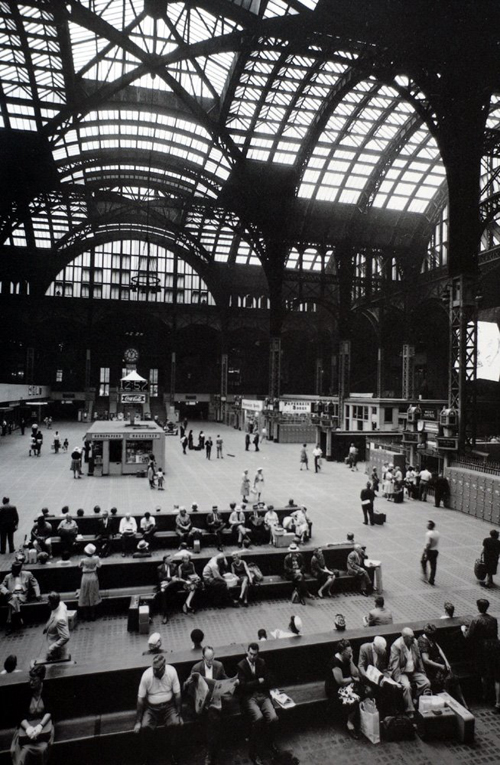 It was an unpopular event in the history of New York City when Penn Station was razed to make way for the multipurpose indoor arena and entertainment center, Madison Square Garden, that stands there now.  Reps from the Garden come to Sterling Cooper looking for a way to end protests from architectural preservationists and locals.  Don has an answer.  He sees that these protesters, Sterling Cooper copywriter Paul Kinsey among them, are looking to preserve the past.  The best way to divert attention from history is to highlight the future of a changing city.  And that future is Madison Square Gardens. It’s “the cornerstone of the New York Renaissance.”  By 2010, New Yorkers have all but forgotten the architectural masterpiece that used to stand in its place.

Sterling Cooper lands an account with  Mohawk Airlines.  When Don confers with his top copywriters, they bombard him with a chain of stale Native American puns.  Some particularly pungent lines include “Mohawk Airlines: There’s a new chief in the sky” and “Most routes to Boston—circle the wagons, we’ve got them surrounded.”  Don is not happy.  “There has to be advertising for people who don’t have a sense of humor,” he says.  How do you get the public’s attention without resorting to a cheap laugh?  He envisions a scene where a man sits on a luxurious plane, the city disappearing behind him in the window, and “just the hint of a woman’s thigh, because her skirt is too short.” They keep Mohawk as clients until they drop the account in a loyalty skirmish with American Airlines. 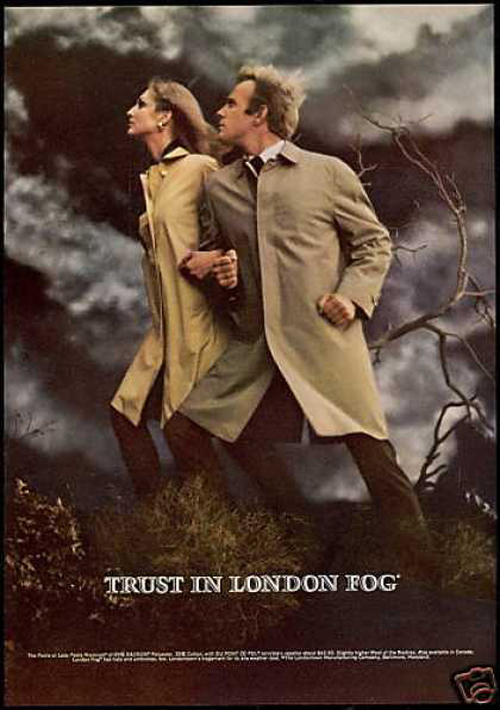 An essential part of the advertising world is customer satisfaction.  When raincoat manufacturers London Fog are dissatisfied with their yearly earnings, they consider dropping our darling agency.  Don and art director Sal Romano travel to their Baltimore headquarters to offer them reassurance.  After committing some compulsory adultery, Don gives his clients some biblical words of encouragement: “There will be fat years and there will be lean years, but it is going to rain.” Get it? Rain? They make raincoats? Clever, Don. 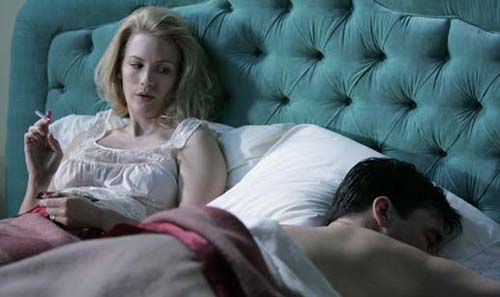 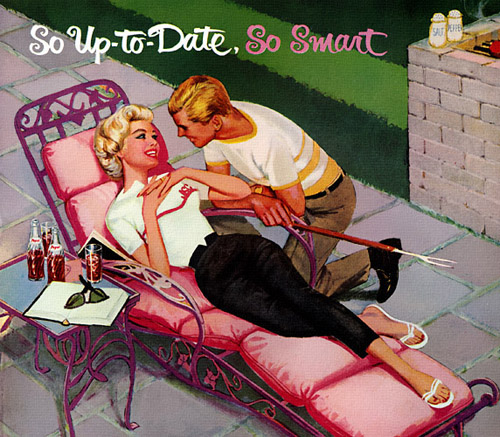 What works better than a movie tie-in?  “Bye Bye Birdie” was destined for box office success—it was adapted from a hit Broadway musical released the previous year, and it starred the delightful and sexy Ann-Margaret.  Reps from Patio Cola approached Sterling Cooper with the idea of making a TV ad (or commercial, as we say here in the future) completely mimicking the opening sequence of the film (the one that features Ann-Margaret singing and running around with a big smile on her face, and this time, with a can of Patio Cola in her hand).  Don puts Sal Romano, his top art director and a Mad Men fan favorite, on the case.  The commercial looks great, and the girl they find to play Ann-Margaret is phenomenal.  Unfortunately, they never air the ad.  Says the client, “It’s not Ann-Margaret.” 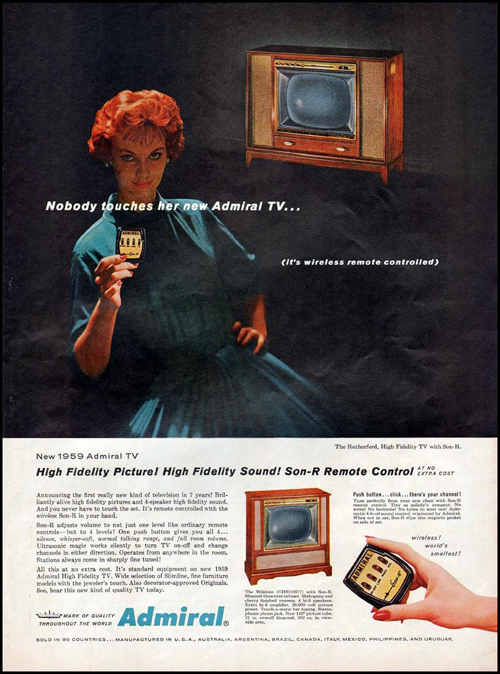 It’s rare for Sterling Cooper’s sneaky Pete Campbell to be the voice of reason, but it happens.  The young accounts executive is notorious for his selfish, malevolent behavior — say, blackmailing Don.  Or blackmailing his father-in-law.  But when representatives from Admiral come looking for an idea that will make their TVs more popular than RCA’s, Pete makes a pitch that is both sincere and thoughtful.  From research he sees that Admiral’s products are more popular in African-American communities and he suggest they advertise with those demographics in mind.  He’s turned down by the clients — cultural attitudes prevail and they decide they have “no interest in becoming a ‘colored’ television company.” 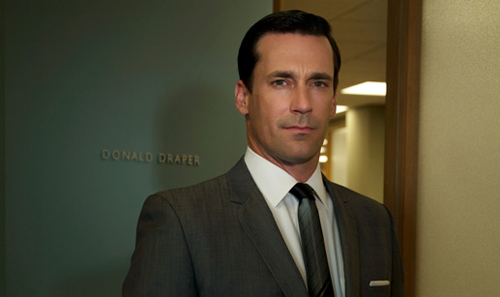 Who doesn’t love a good publicity stunt?  When sales for client Sugarberry go under and the staff at the newly-minted Sterling Cooper Draper Price start fretting about losing the account, forward-thinking Peggy Olsen comes up with a ploy.  Pete Campbell and she hire two frumpy, violent actresses to go to a supermarket and fight over the last ham—the last Sugarberry Ham.  They do, and inevitably arrests are made.  It makes headlines. The people at Sugarberry assume that the agency was behind the stunt, and are delighted.  They keep the account, never mind that one of the actresses had her hair pulled out. 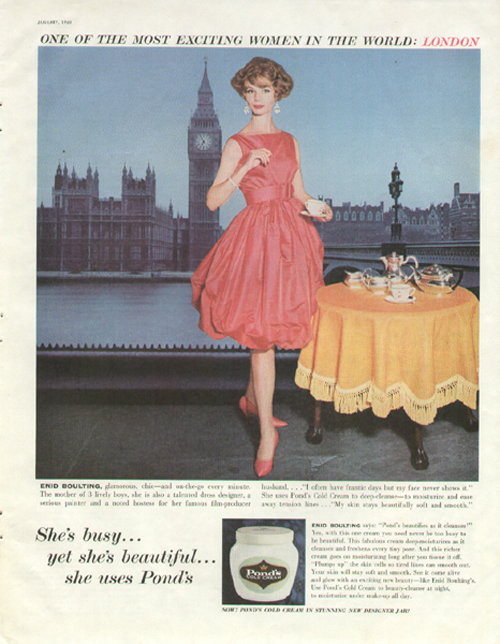 1964 was a big year for the American Feminist movement.  No longer could advertisers depend on the old “it will help you find a husband” adage to sell women’s health and beauty products.  Leave it to Peggy Olson to defy conventions and invent a slogan for Pond’s Cold Cream that ignores the husband-hunting concept entirely.  “Indulge Yourself.”  It’s about you.  Your beauty is your own.  This, in the same episode that a snide artist declares, “Art in advertising? Why would anyone do that after Warhol?” 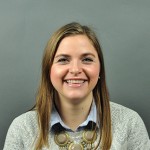 By Ashley Walter, Director of Operations

Ashley Walter is ProspectMX's Marketing Operations Manager. With a BS in International Business and concentrations in Marketing and Spanish, Ashley uses her knowledge in these industries to manage every aspect of a client's campaign. Before coming to work full-time at ProspectMX, she held an internship with us and demonstrated remarkable skill and knowledge in the internet marketing field. Creative, meticulous, and hardworking, Ashley is the go-to girl for ProspectMX and can handle any task or situation that is thrown at her.